The “Polychromos” pencils celebrate their 111 year anniversary in 2019!

The “Polychromos” color pencilsq made by Faber-Castell, are highly praised by artistic individuals such as Karl Lagerfeld and Ferdinand Porsche, as well as by hobby painters, who demand the best quality from the products they use. In 2019, the “Polychromos” has its 111 birthday! This occasion inspired Faber-Castell to create a limited edition of the pencils with the initial outlook of the box – it has the image of a breathtaking sunrise, which symbolizes the beginning of a new era! Join us on our journey through the history of the “Polychromos” box: 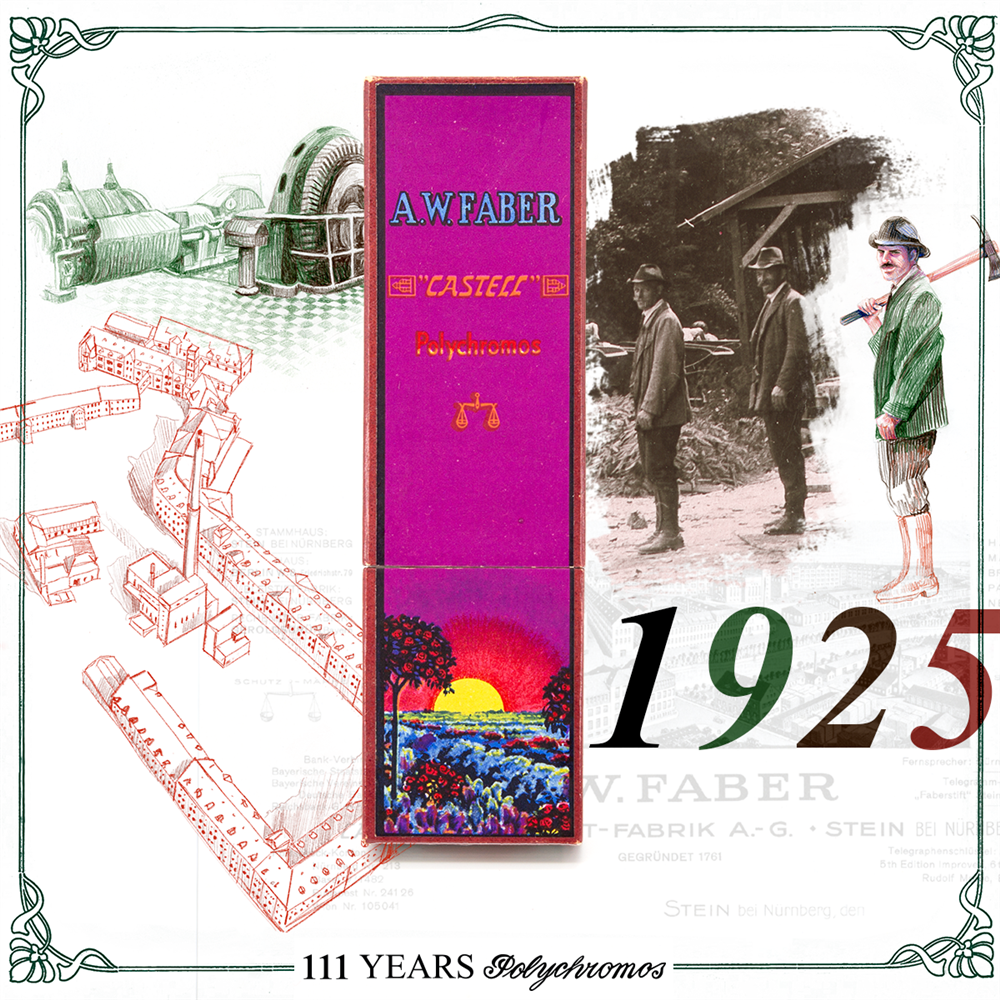 In 1925, the construction of a new modern manufacturing complex in shape of a “U” was started to meet the increasing demand for the A.W. Faber products. Did you know? These buildings and our Faber-Castell production inside can be visited as part of our Faber-Castell experience.

This elegant and colourful package reflects the Art Déco Zeitgeist, which had its climax in 1925. Did you know that 1926 was also the year of birth of both Queen Elizabeth II and Marylin Monroe? 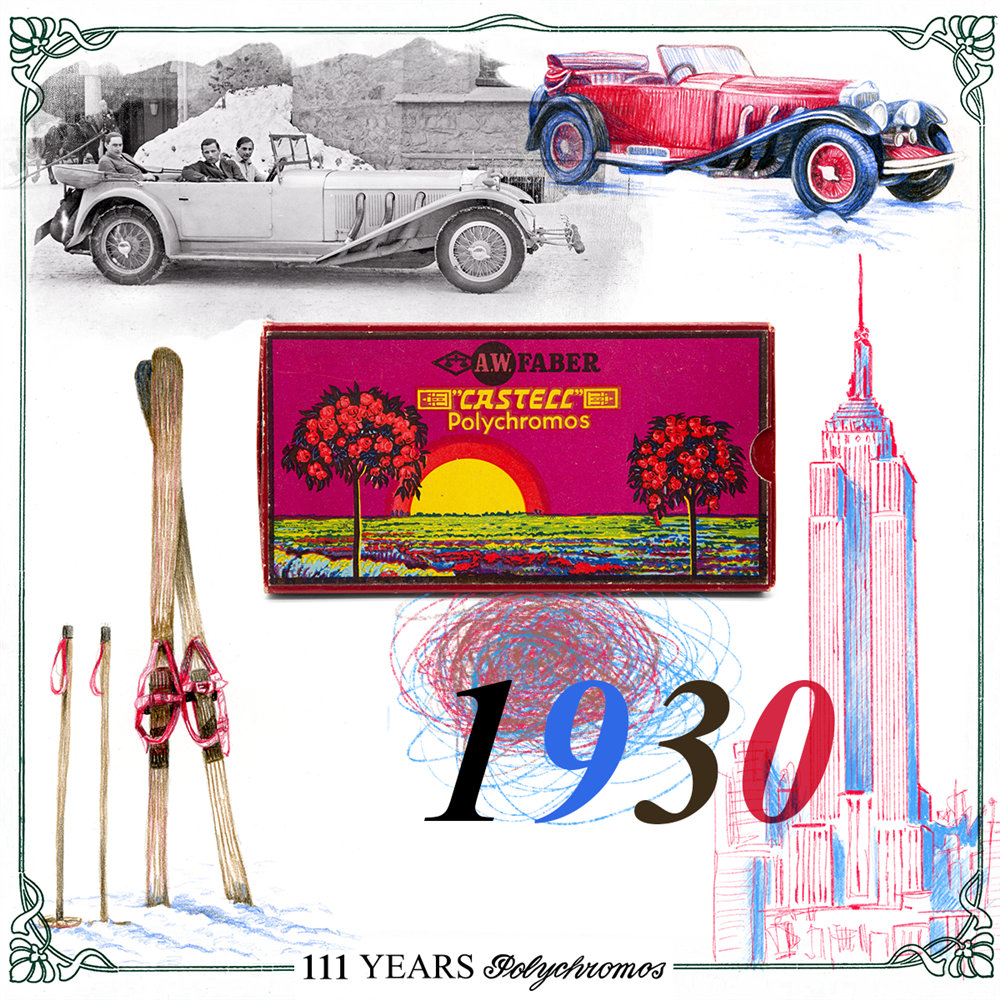 Count Roland von Faber-Castell enjoys his winter holidays skiing in St. Moritz. Meanwhile construction and building of the highest skyscraper at that time starts at the other end of the world – the New York Empire State Building. 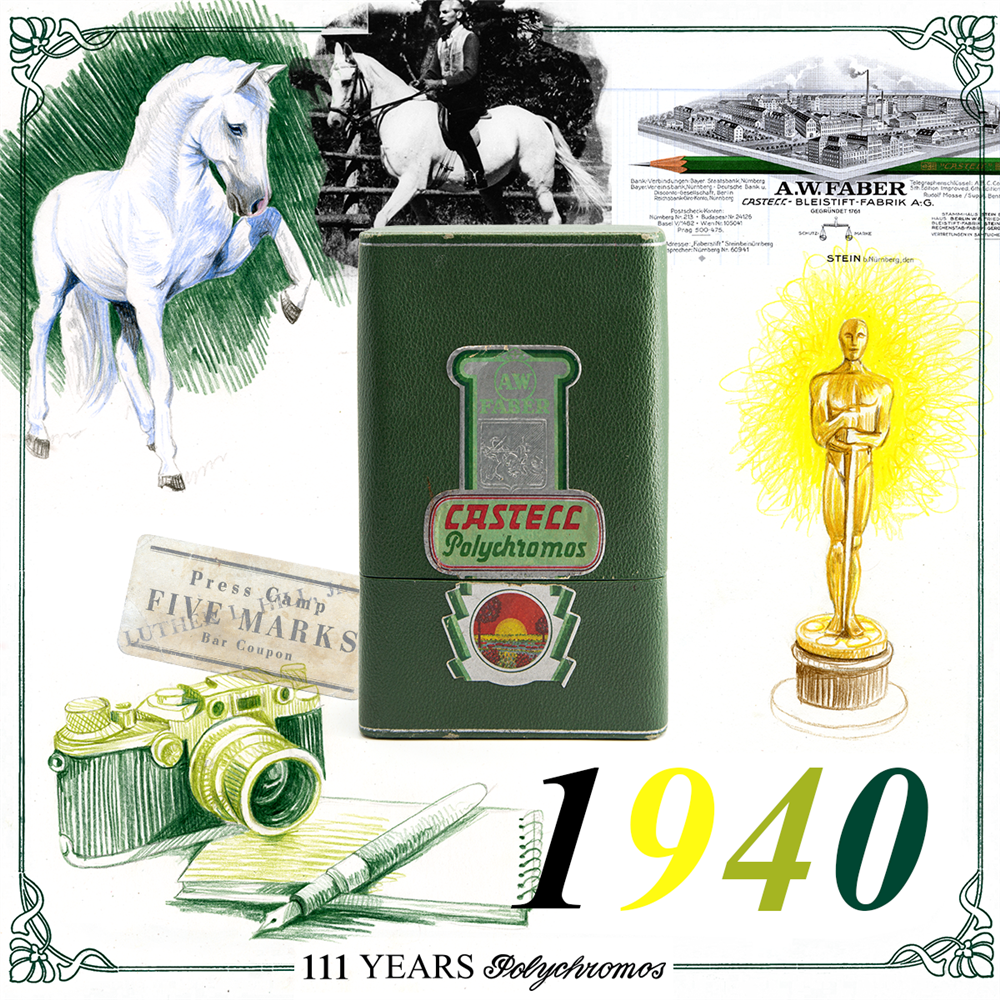 During his entire life, Count Roland von Faber-Castell was an enthusiast horseman. During these turbulent times Gone with the Wind set a record for Academy Award with eight wins and 13 nominations. The castle in Stein at the same time became the center of life for many reporters that came to Nuremberg for reporting about the Nuremberg War Crime Trials. They stayed in the Faber -Castell castle, which had been turned into a press camp by the Americans.

In the course of the economic upswing, Count Roland von Faber-Castell devoted himself with intense energy to the founding of branches and the reacquiring of lost companies all over the world. Exotic parrots adorned the 50th Polychromos packages. Meanwhile Roland’s son Anton-Wolfgang set new school records in shot-put. It took another thirty years to beat his record.

In 2019 you will find the “Polychromos” pencils in the same beautiful box in which the “firstborn” edition was released in 1908. Additionally, the pencils inside have their original branding and you can buy a set of unsharpened pencils, which is the way in which they were first put on the market!

You can find the “Polychromos” limited edition here: https://www.office1.bg/producttag/154/faber-castell-polychromos